Making the best of what you have!

Last blog, stranded in Kingman.  I'm back home in Colorado now.....with a 2013 Ford Focus.  Nice little car that made the trip home just fine.  So I had another whole week in Kingman and got the "office" and the kitchen cleaned out.  Sort of glad I had to stay as now those tasks are done.

Kerry's grandma Mae passed away 3 years ago, and they had not gotten rid of much of her stuff.  She painted china.  She was an amazing artist.  But many of her pieces have chips or breaks in them.  I didn't want to toss them and no one would buy them at a garage sale, so I decided to play.

Now, when you play like this, you do need certain aids/tools.....like chocolate, a low temp glue gun, diet coke.... 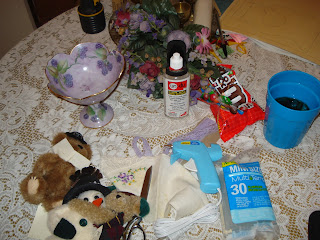 The pedestal dish had a big chip out of the corner of it: 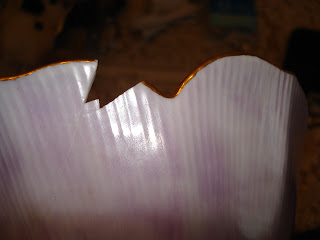 The bear and the snowman at the bottom left of the top photo were taken apart and undressed using undu.  Yep, you can use undu on fabric!!!  And the little pilgrim bear was undressed as well.  I found some broken bits of jewelry as I was cleaning up, so I used those as well.  Glued most of the pieces to the base mirror so they wouldn't slide around.  Added the matching plate on a stand in the background. Pulled apart some very old silk flowers and put them down into a little vase that matched.  Added barbie ornaments as my mother-in-law collected those. 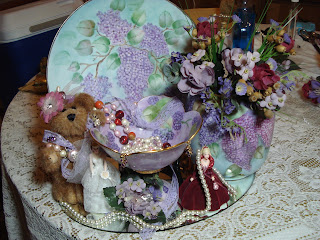 If you click on this photo to enlarge, you can get a better view of the details.  Earrings glued to the side of the pedestal dish.  A silver bear earring glued to the bear's paw.  The other earring glued to a button on the center of the bears chest.  Earring posts clipped off and glued down into the silk flowers.  Netting and ribbon from Mae's sewing box threaded among the items. 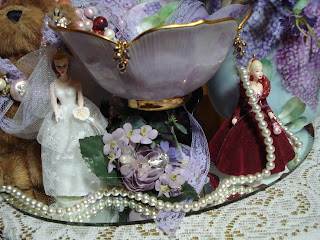 I took apart a silk flower (on the bear's ear) and took apart a plastic hair barrette and layered the 2 together, glued it back and used it on the bear's head.  More earring studs on the shoulder on the lace.  Broken beads and one complete necklace draped around the bear and into the dish. 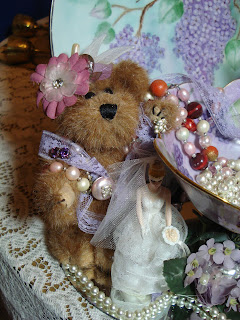 Once I got the flowers arranged, I simply glued them together and stuck them down in the vase.  The paintings on the 3 pieces of china "match", but 2 are wisteria and 1 is grape clusters.  Can you tell which is which? 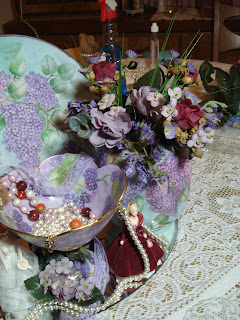 This is the little bear that had it's arms around the snowman.  I left the arms stitched together and threaded the hanky between them.  Glued beads together to make the pearl necklace and glued grandma's earrings as a "ribbon" on the ear and a brooch.  Now this one is just too cute!!! 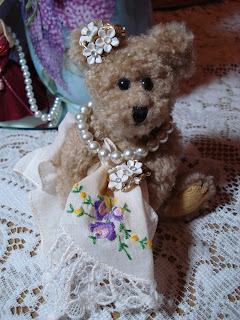 When my father-in-law saw what I had done with broken bits and pieces, he was quite pleased.  We decided to set this on the end table in the family room.  I don't think "trash" has ever looked quite so good!!!  Barbies, jewelry, hand-painted china, bits and pieces of lace, old hankies on a mirror - reflect the memories of times gone, but not forgotten.

Posted by Jennifer Moore Lowe at 8:26 AM