I didn't scrapbooking or stamping until February 2003. My stepdaughter took me into a local scrapbook store and one look at that pretty paper - and I was hooked! (OK, we all need someone we can blame this on!!!)

In the summer of 2004, I went to a weekend retreat sponsored by Memory Makers Magazine. It was a bit like a CKC convention, except a bit more wild!

We met up in groups online and formed "camps". The group I was in decided to be the Scrappin ScoutMasters and we actually dressed in costumes! (I'm second from the right) 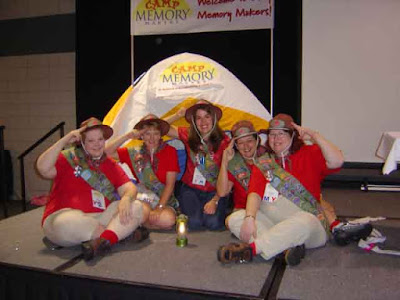 I could write a hundred stories about that weekend - but just looking at the photos brings back such wondeful fun thoughts! We even had matching pajamas and sat around an electronic campfire and sang songs at night! (I'm on the far left) 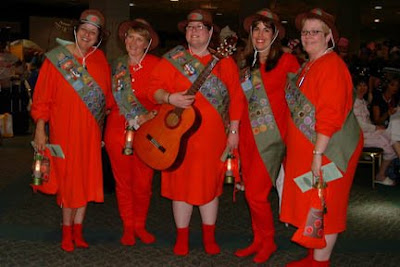 And we ended up winning first place - the grand prize - hundreds of dollars in scrapbook product. It also landed all of us the invitation to become part of Spellbinders first design team. 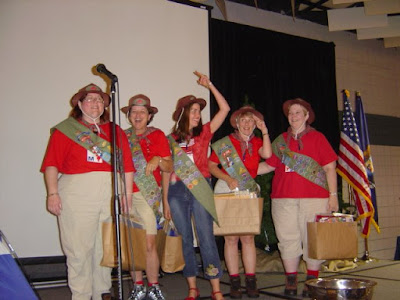 Looking at these photos, and the experience of the weekend retreat we just had at my house, I was wondering what my life would be like without these experiences? There's nothing like spending a weekend together creating and designing!

And now, there's a brand new retreat that you can attend! It's the After Midnight Art Ranch. Linda and Tom purchased the perfect place and just hosted their first retreat. Check out the photos of the awesome projects! Jeni Calkins, Linda Hansen and Linda Abare were instructors! Sure hope I can attend in the future! This year - the dates conflicted with the retreat I was hosting.

But what a memory maker! Have you been to one? Was it fun? Did you like it? What kind of a retreat would you like to be part of? The ones I've been to have all been a blast!!!
Posted by Jennifer Moore Lowe at 6:00 PM