I have a very old Pendleton wool navajo jacket that I got at a thrift store years ago.  It has plenty of moth damage. 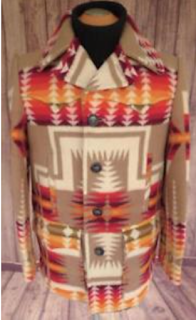 And I had an even older vest - probably had it at least 20 years.  I love Pendleton wool.  Can't get rid of it no matter what condition it's in. 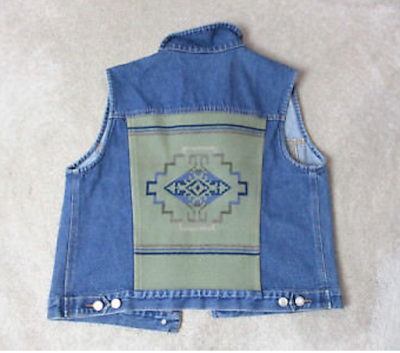 The very last thing Kerry bought me was a Pendleton Wool blanket in Bend, OR.  It had denim hues to it and we both thought it would look great in our denim-themed art pod.  When I sold the r-pod, I had to keep the blanket.  The pattern is called "star watchers".  Kind of appropriate as we would sit outside and watch the stars at night on that last trip. 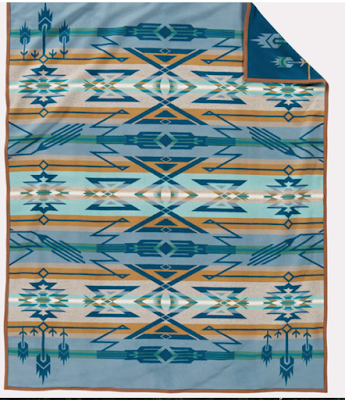 I started out with the tan jacket at the top.  When I took the lining out, the inside was primarily black.  I had enough to make an entire pillow and an insert to put on a denim pillow sham.  There was absolutely no moth damage on the inside and you cannot tell that it wasn't the outside.  One of the things I love about Pendleton wool.

And I was able to make a pillow insert from the vest.  I think they turned out perfect.  You can see the front side of the original jacket on the left, the inside is the black pillow and the pillow on the right is the vest.  I've had the bear for years. 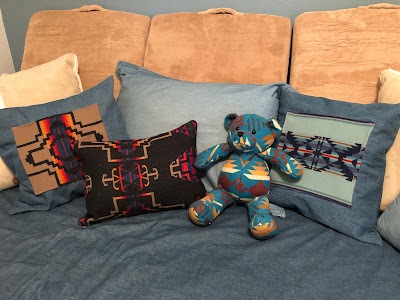 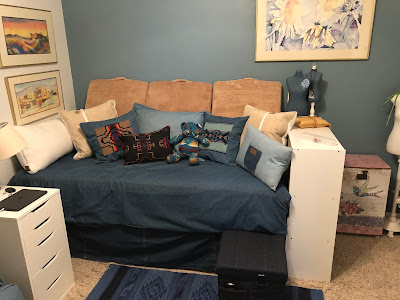 Think I have enough pillows? Those tan "wedges" in the back also allow me to convert the bed into a recliner or lounge.   They each have 4 possible positions.  We had them in the art-pod as well. 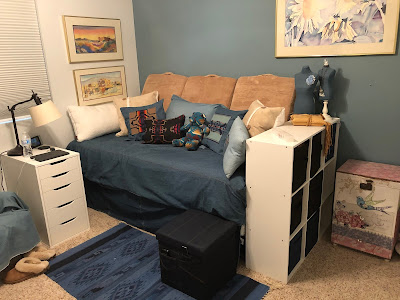 The rug is hand woven - we bought it in Hualtuco Mexico on our last trip there in 2009.  That's the year Kerry had his first heart attack.  I am surrounding myself with memories of places we've been and things we've done.  I really like the pendleton pillows.  Never throw anything out!!

Jenny, Looks like we share a love of the color blue. Wow, you have done so many creative things! Nice work! Roberta Heaton Sarver