The Workbox 3.0 - my personal review

I first saw the "original scrapbook" at a trade show back about 2005.  I was enamored with it the moment I saw it.....but simply couldn't afford it and had no space for it.  Thirteen years later, I now own the current version of it and just love it! 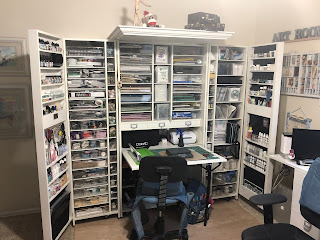 I suppose that I should explain that I converted the master bed room into a large art room.  I still have some of my go-organize cubes...but I will be downsizing them as well! 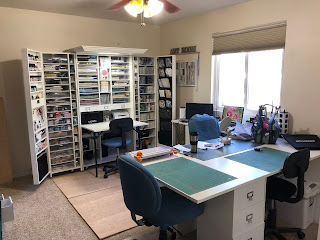 I'm on the originalscrapbox.com email list and in September, I got an email about their scratch-n-dent sale.   I live about 8 hours from the plant and made the call.  They had several in the warehouse and I just decided to drop everything and make the drive!  The aspen were turning.  It was a great trip!

When I arrived the next morning after spending the night in a local hotel, I was greeted by "Jennybox".  Immediate new friend!  She took me to the warehouse where I think I swooned!  I wanted them all!  LOL!  But in my mind, I wanted a plain white box.   The "ergo".   They had to pull some out to see what was behind others, and they found one.  It was simply a no brainer at that point!

A scratch-n-dent model.  I could not see a single scratch or dent on it.  Half price off of a new model and it was assembled.  My hotel and gas were less than shipping.  I did buy the overhead panel/light and a wonderful young man expertly packed it in the back of my F150....filling up the truck bed, the back seat and the passenger seat.  I could still see out the rearview mirror for the drive home.  I think we were done by 10 am and I was back home by 8 pm that night!

It was set up the next day, but it took me a few days to get it loaded.  I bought sheets of wood plywood and covered the carpeting as the casters just will not roll on carpet (medium pile) when it's loaded.

I am thinking about moving into an apartment and know that I need to downsize my craft stash.  I also know that my future space will be limited.  I'm keeping my watercolor painting supplies, card making/die-cutting/stamping supplies, some embossing stuff, all my copic markers/airbrush.....ok, who am I kidding?  Downsizing?  LOL!!!


Sizzix makes 5x6 storage envelopes with magnetic cards in them.  They are perfect for storing stamps and dies and fit nicely into the bins in the center slots.  I have unmounted all of my stamps and every die/stamp is now in these envelopes - the drawers are sorted by type so I can easily find what I want.

The best stamp/die storage system I have ever had! 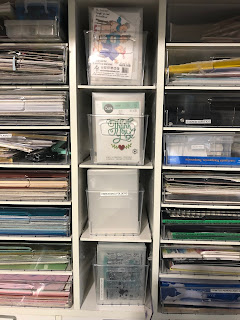 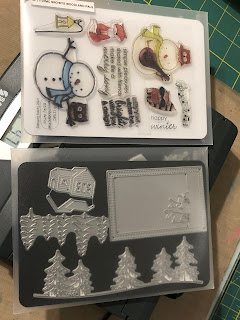 The plastic divider trays that I had purchased from Michaels and used in my "go-organize" cubes fit perfectly inside the 12x12 trays and still serve their purpose of organizing small things.  This is my glue/tape/undu drawer: 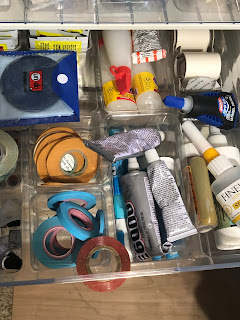 I did mess with the light a bit.  Velcro'd the switch to the underside of the drawers and the power outlet is velcro'd to the back rear center of the opening.  This makes it really easy to turn the light on and off....and I don't have cables anywhere. 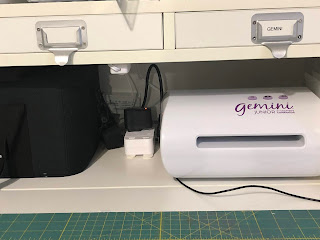 Hope you can see the light switch on the top and my outlet in the bottom back.  It has 2 usb ports and 2 power outlets so I can charge my phone, iPad, etc. 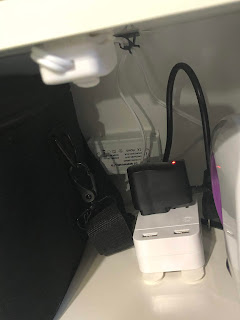 Kerry had the 12" iPad and I'm keeping it because it sets nicely against the drawers and I can watch my youtube videos while I work!  Yep, that's theoriginalscrapbox.com home page on my screen right there and I'm looking at it from about 2' away.  I'm sure in some future rendition they will include a drop-down frame to put your iPad into.  Oh dear....maybe I'll have to make one!  Hmmm.... 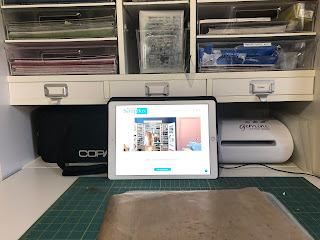 I purchased the right side door frame.  I did not like the little velcro bags because if you put anything heavy in them, and then velcro them on, the back wall bulges outward.  This works for me.....but I did save all the bags and am using them in other spots! 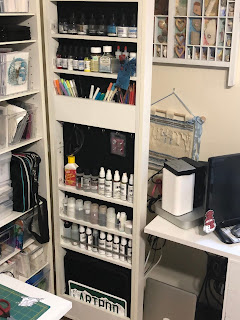 I had a Karen Foster Seat Tote from 10 years ago and it came with this velcro back file insert.  It happens to fit perfectly onto the velcro in the lower left hand side.  Yep - no more file cabinet!  Love how this worked out! 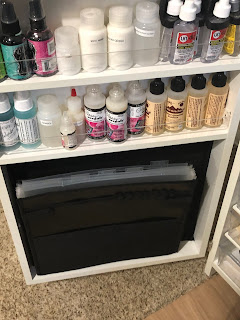 It has velcro closures on both sides but it does open out and you can see some manilla folder in it.  Starting to think I don't even need those....just drop my receipts down between the dividers. 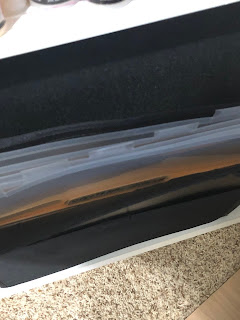 After I had had it for a couple of months, I re-did the shelves.  I think when you start out, we all just follow the directions.  But that doesn't always work.  In this slot, I have my Misti and to the left of it are my card making supplies: 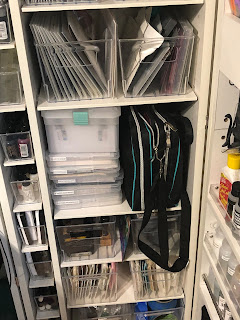 As you can see, I have little card storage packs labeled so I can tell what's inside.  This works perfectly to grab and go to crops or classes.  I precut my dies, pre-emboss backgrounds, pre-color images and at crops, all I do is assemble.  Makes chatting with the gals so much more fun! 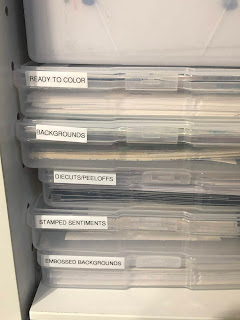 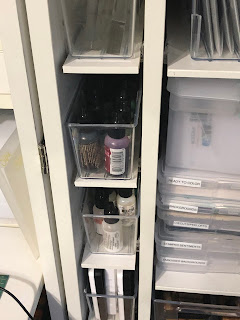 My alcohol inks are in one, my distress oxide reindeers in another....and I can pull each bin out and put on my table while I work.  Everything at my fingertips and I can also grab these to go to a class or crop. 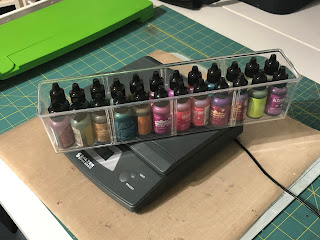 I even have most of my stamp pads in these bins. 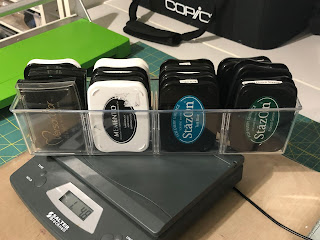 What works for me may not work for others but that's the true beauty of the workbox - you can put the shelves/bins anywhere you want them.  It will hold 1200 pounds and I'm pretty sure I'm at the max weight!

When I drop the table down, it folds into a 30x33" cube which is such a small space.  Here's their video:

which pretty much says it all!

Would I buy it again? Yes!  In fact, I didn't have room for any of my sewing stuff and really think I need the sewing box....but that sort of defeats my intent of downsizing! 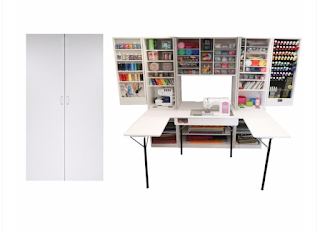 or maybe just the EZ Sew....it has an elevator for the sewing machine! 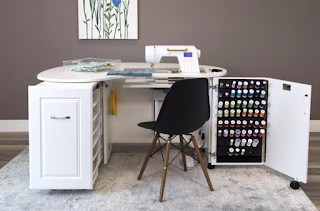 If you decide to buy one because of this review, just let Jennybox know that JLo sent you!  :)

Best get back to selling more stuff on ebay so I can buy one of the sewing boxes!


Posted by Jennifer Moore Lowe at 8:41 AM