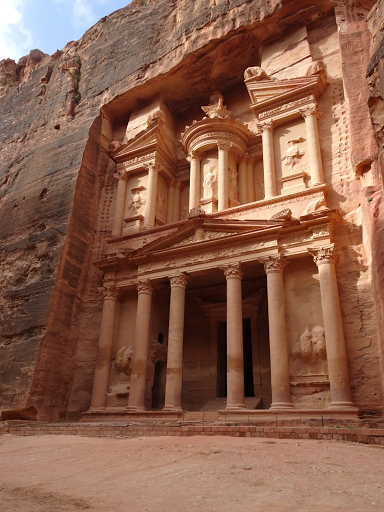 Sometimes a picture is worth a thousand words.  I don't think I can improve on this.  It's the first building you see.  It's a tomb.  Can no longer go inside of it due to damage and vandalism over the years.  Supposed to be yet another layer below this. 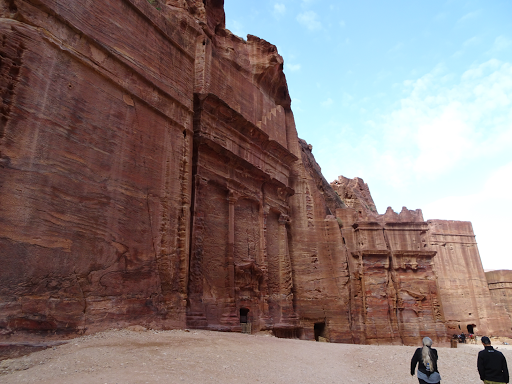 And layers below these.  Carved into sandstone.  Everything was originally a tomb, vandalized hundreds of years ago.  Then the Bedouin lived in these until it became a park in 2003.  There are still some at the very end that are residents. 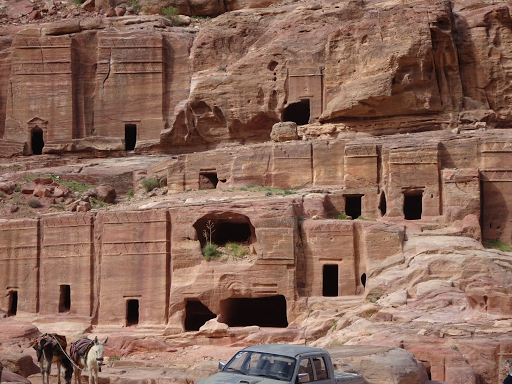 Everywhere.  In layers.  One door per family burial unit. 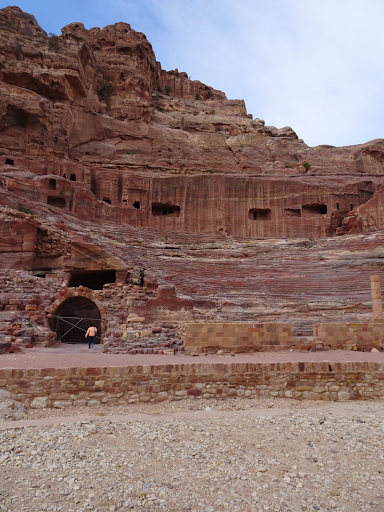 This is a 3000 seat auditorium.  Incredible....all carved out of sandstone. 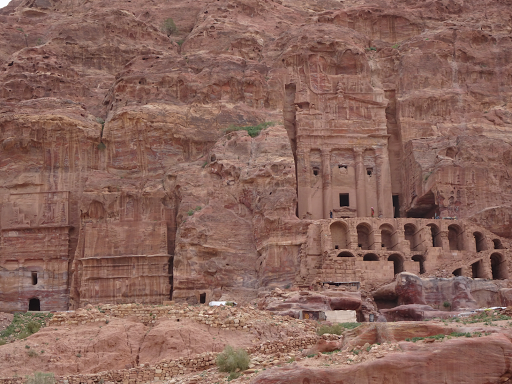 The large ones were for royalty supposedly. 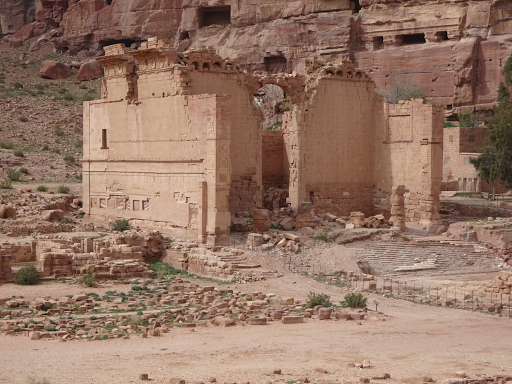 The only free-standing building...a temple.  Interesting that the floor plan is much like a Jewish temple. 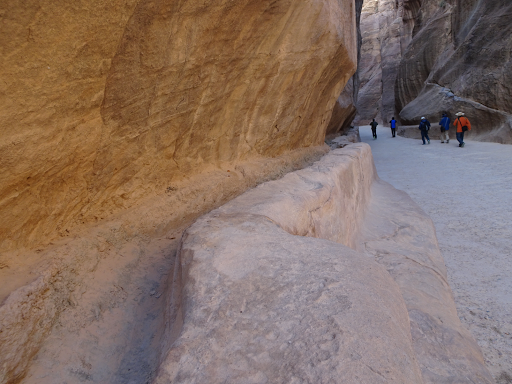 I was most impressed with the water collecting system.  3 layers of these troughs to funnel water from high places and the spring where Moses struck the rock.  Narrow passages added to the speed of the water. 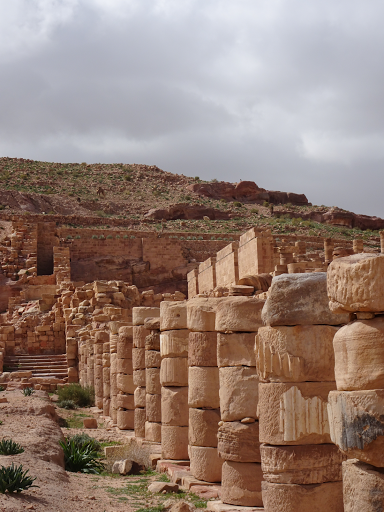 Rows of columns, lots to be rebuilt.  Much left for future generations.  The current archeology site here is just a small "church". 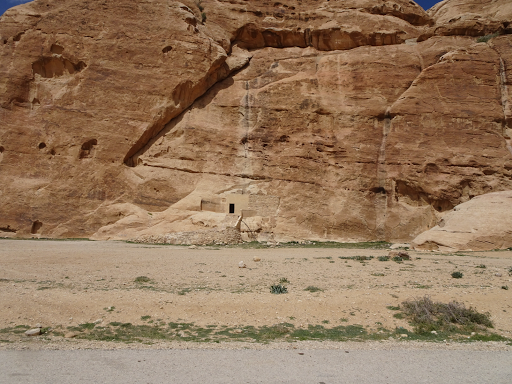 Even after we left Petra, you could see many facades in the rocks along the way.  Many looked like they were being lived in by the Bedouin 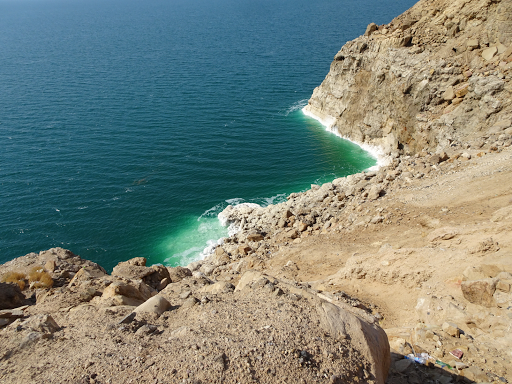 On the Dead Sea, salt collection along the shore line.  The shore is shrinking 1KM per year.  I believe that it has to in order to fulfil the prophecy that the Dead Sea will give up her riches.  On the Israeli side, they are mining the ground that used to be under the Dead Sea.  As well as massive production of Dead Sea products for skin care. 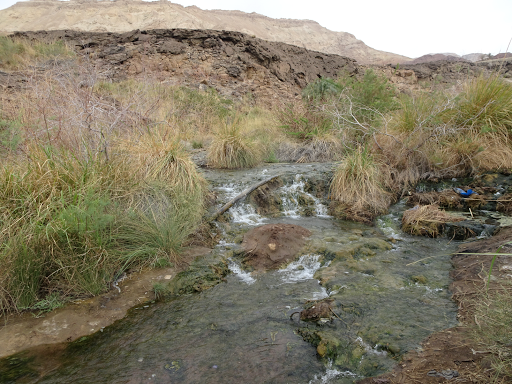 Our driver took us to these springs that flow into the Dead Sea.  Put my hand in it - near boiling water and we are nowhere near the origins of the springs.  You could see the steam and feel the heat in the air.  Absolutely amazing. 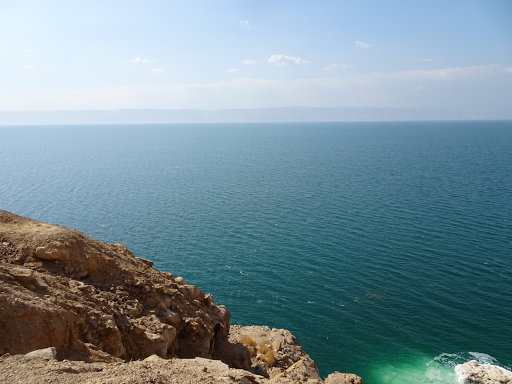 Spectacular view of the Dead Sea looking towards Jerusalem.  I think it would be amazing to see this at night with the hills of the city all lit up. 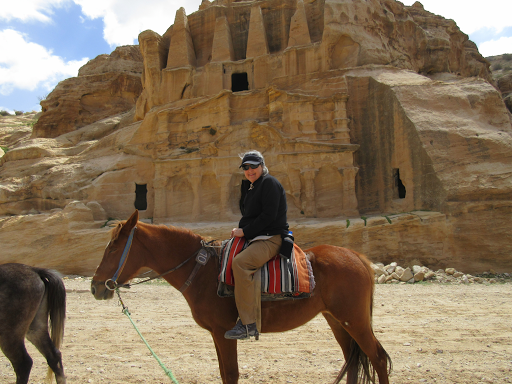 This is a shot that our horse guide took with April's camera.  Yes....I needed to ride the horse out.  Still, we walked almost 8 miles today.  What an adventure!
My question for later research.  They say the Nabateans built this in 300BC.  But if this is where Moses struck the rock, how do we know that it wasn't built by the Israelites and the Nabateans took it after the Israelites left???  When you look at the engineering feats of this place, I almost have to believe that it was the Israelites.  Now, that will be an interesting research project!
Here's a place to start:  http://www.bible.ca/archeology/bible-archeology-exodus-kadesh-barnea-moses-struck-rock-waterless.htm

Posted by Jennifer Moore Lowe at 6:33 AM