If you think it didn't happen

Some days, genealogy is simply mindless data entry. I sit and enter names, dates of birth, dates of death, and my software creates wonderful family trees.

So my current project is to do a family tree of the descendants and ancestors of the Cotopaxi Colony. This was a Jewish agricultural community that came to Cotopaxi, Colorado, and you can read the story on the link provided. But here's the thing. I was entering the names and dates from the family tree and suddenly, my mind came alive. Every single date of death was 1942.

So I started looking at what i was entering. I had to know who this was and how they were "related" to the Cotopaxi Colony.

A brother and his wife, their children and all of their grandchildren. Another brother, all 6 of his children, and their children....and the list just went on.

I went online and started researching the Holocaust archives and records and have found the names of each member of this family.....all lived in Brest Litovsk. All perished on the morning of October 15, 1942.

Their brother married a woman who was part of the Cotopaxi Colony and he came to America with her. His entire family remained in Russia.....and was wiped out.

Including each of the children in that family.

From the Holocaust records:

all the estimated 50,000 people shot and buried at Bronnaya Gora were Jewish, victims of the Holocaust. About 20,000 of them came from the town of Brest (formerly called "Brzesc nad Bugiem", in Poland between the wars; and "Brest Litovsk", in Russia before that), now in the independent country of Belarus, on the border with Poland. The victims from the Brest Ghetto were rounded up on October 15, 1942 and trained to the massacre site to be shot and buried in previously prepared pits. The monument above recalls the central role that trains and railroads played in the massacres at Bronnaya Gora and at many other massacre sites throughout the former Soviet Union.
At 6:00 am on the morning of October 15th 1942, one of the non-Jewish neighbors informed the Jews of Brest that the ghetto was completely surrounded by the Nazis. Some of the Jews tried to hide in predetermined hiding places, but they were found by the soldiers and taken to the Brest train station at gun point, loaded into cattle cars and transported to the village of Bereza Kartuzka (68 miles, 114 km northeast of Brest). Upon arrival, the Jews were unloaded and marched to an area where a large trench had already been excavated. The entire group was forced to remove their clothes. They were then pushed into the trench and machine gunned by the Nazi soldiers who surrounded the trench. The action continued all day and it is estimated that 50,000 Jews were killed that day, most of them from the city of Brest.
In 1944, when the Russians recaptured Brest, there were only nine Jews (two men and seven women) left alive.

Now, while this may be hard for you to read...and you may be one who has been led to believe that this didn't really happen....when you do genealogy and see that an entire family of 3 generations ALL died on the very same day.....

you know that it is real.

We're making butterflies this week to honor the 1.5M children who perished along with the children in this family.

Won't you join me in making one as well?

This is another one that I made using fantasy film for the inside of the wings. 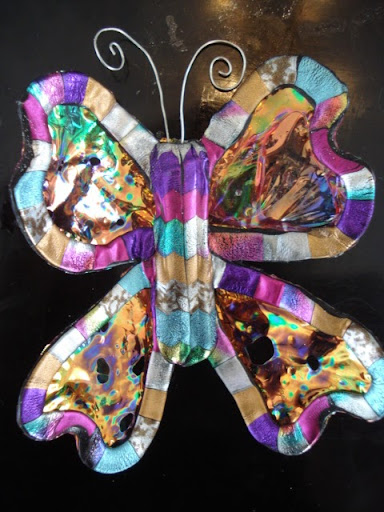 What a joy, what a delight for me to be able to assemble a family tree for the Cotopaxi Colony. What an honor for me to make butterflies for this project. 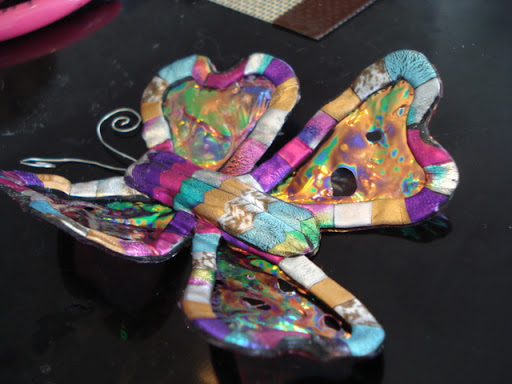 Thank you for sharing this post. I am a descendant of Charles Prezant, one of the original immigrants to the Cotapaxi Settlement. Reading this gave me chills and a new appreciation for my history.

Bonnie, please email me at jlowe54@gmail.com so that I can include you in the Cotopaxi family tree.

Hello Jen, I am also a descendant of a Cotapaxi colonist, named Moses Rosen. He was my great great grandfather. My grandfather lived with him as a child. He told many stories of the hardships his grandfather faced in Cotapaxi, especially the man who brought them there. My grandfather said he was a crook who promised them so much and ended up taking advantage of them

Anonymous, please email me directly as I do not have a Moses Rosen living in Cotopaxi and would love to have more information. Thanks!

I am a descendant of the crook that brought the immigrants to Cotapaxi. I cannot condone what he did and the suffering he caused however it is comforting to me to know that what he used for his own selfish gain G-D used to preserve life.

Bonnie, please do not think of him in any way other than a man that G-d used in a great way to preserve 77 people...which saved thousands of future generations!!

Please send me your email address so I can add you to my contacts and send yu updates on my research. I had to set this project aside, but now that I live closed, I am back doing my research. Uncovering new documents that are unfolding a fantastic journey of the Jews in Cotopaxi!