When my brother was little, we had this great "game" we played with him. We would stack those old alphabet blocks up as high as we could, then call him and he would crawl over and knock them over. I remember it was just the most fun ever and we would restack those blocks until he wore out!

I don't know how, but someone got a photo of him in action - and it has always been one of my very favorite photos. So I decided to use it in this beeswax collage titled "Play". 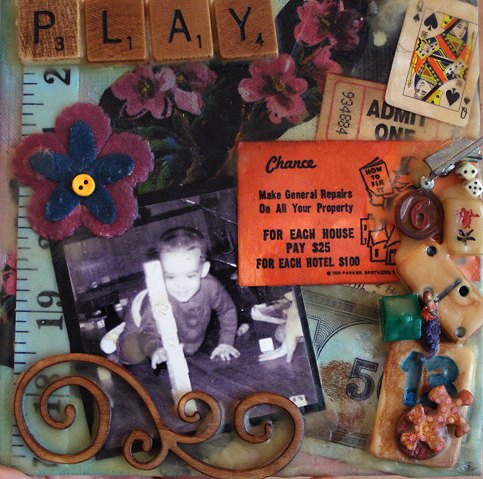 Bind-it-all makes 6" canvas boards that you can alter and use as binder covers. But I think it makes a pretty fun wall hanging just as it is!

I'll be teaching beeswax collage while in San Diego. I have hundreds (probably thousands) of game pieces I'll be sharing. Should be a totally fun class!
Posted by Jennifer Moore Lowe at 10:31 PM